The Double-edged Sword: How Character Makes And Ruins Presidents, From Washington To Clinton 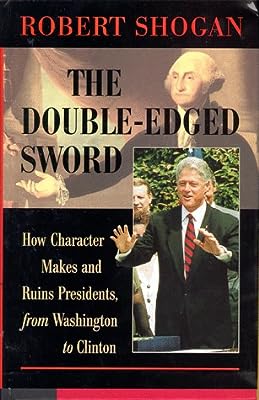 Ever since the Founding Fathers' faith in George Washington led them to create the presidency, the issue of character has been inextricably linked to the Oval Office. The American people have always expected their presidents to serve not only as political leaders but also role models of personal behavior, setting standards for raising their children. But as the new millennium nears, character and values have taken on a significance never contemplated by Washington and the Founding Fathers. In the second half of the twentieth century, with the enfeeblement of traditional political institutions, and the explosion of electronic media, John F. Kennedy used his character to cross a new frontier into the era of the personal presidency. Democrat Kennedy blazed a trail in image manipulation which Republican Ronald Reagan carried to new heights. Then came Clinton. No president before him has been so calculating and determined in exploiting his personal life and values; yet no chief executive in modern times has been so reviled and condemned because of his personal behavior. The Double-Edged Sword: How Character Makes and Ruins Presidents, from Washington to Clinton rebuts the claim put forward by Clinton and his supporters that a President's private life can be separated from his performance in office. By examining the morality of some of our most prominent and influential Executive Chiefs—from the birth of the Republic and the launch of the New Deal to Watergate and the Clinton presidency—Robert Shogan illustrates how the so-called character issue, and the intertwined issue of values, are linked to the political process and governance. Based on extensive research as well as interviews with politicians and journalists, the book looks at how the strengths and weaknesses of character help shape presidential performance for good and for ill. It shows how presidents and their rivals on the political stage use the public's perceptions of presidential character to manipulate political audiences—namely, the press and the electorate. Ultimately, the book demonstrates that presidential character is a double-edged sword—a weapon that can discredit a president and destroy his credibility, but also a weapon that he can use to define himself and mobilize support—in sum, the ultimate weapon in modern American politics.

Robert Shogan, a national political correspondent for the Los Angeles Times, has covered politics in Washington for 30 years. In The Double-Edged Sword, he considers how important a person's character is in determining his success as president of the United States. His assessment weighs the personalities and characters of most of the nation's chief executives, from George Washington's temper and self- confidence to Bill Clinton's tendency to shade the truth and avoid a firm stance on anything. For example:

In the case of Jefferson, his character was to remain a riddle that hung over his presidency, as it does over history. If Jefferson deceived others ... it was because his personality led him to deceive himself. This duplicity stemmed from fundamental personal conflicts, between his yearning for privacy and his urge for power and recognition.

Taking advantage of the attention focused by the national media on Bill Clinton's character in the aftermath of revelations about his relationship with Monica Lewinsky, Shogan devotes the chapter "Telling the Truth Slowly" to Clinton, who was, he writes,

limited as president by the taint on his reputation that had accumulated during his years on the national scene. What was missing from his presidency, as a result of a wide range of indiscretions, indulgences, and excesses, was the moral authority that usually accompanies the office.

The Double-Edged Sword begins by asserting that character does matter when it comes to presidents. It concludes by leaving an open-ended question as to how much Clinton's behavior may have permanently diminished the office. --Linda Killian Buy it Now
See more The Double-edged Sword: How Character Makes And Ruins Presidents, From Washington To Clinton on eBay