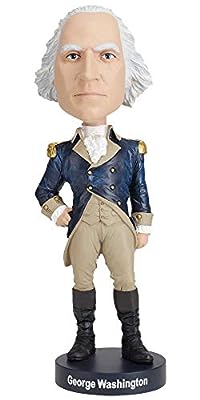 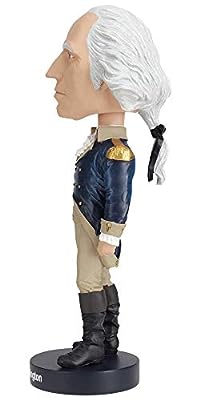 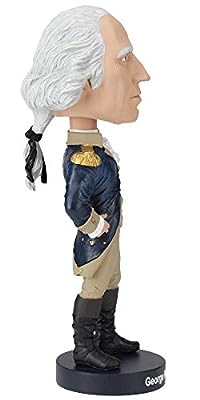 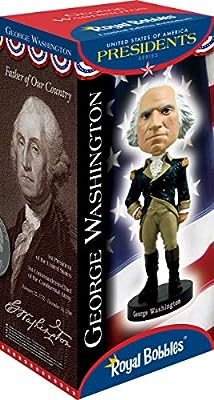 George Washington was the commander of the Continental Army in the American Revolutionary War, and was the first President of the United States. For his central role in the formation of the United States, he is referred to as the father of our country. He presided over the Philadelphia Convention that drafted the U.S. Constitution . He was awarded the first Congressional Gold Medal, and has been consistently ranked by scholars as one of the greatest U.S. Presidents.

GEORGE WASHINGTON BOBBLEHEAD: George Washington was an American political leader, military general, statesman, freemason and Founding Father who served as the first president of the United States. He commanded Patriot forces in the new nation's vital American Revolutionary War and led them to victory over the British. HISTORIC COLLECTIBLES: Royal Bobbles features several different product lines of famous icons, including entertainers, artists, singers, and historical/political figures. Perfect for collectors of every genre, these bobbleheads make great gifts for everyone! Each figure features a hologram with a unique serial number on the bottom of the base to indicate authenticity. UNIQUE, COLLECTIBLE BOBBLEHEADS: Each of Royal Bobbles' premium-quality bobbleheads come in colorful, printed collector's boxes with custom-cut Styrofoam inner protection. All Royal Bobbles bobbleheads are made from high-quality, heavyweight polyresin, stand at over 8" tall, and are individually hand-painted. LIFELIKE FIGURINES, EXQUISITE DETAIL: Because Royal Bobbles bobbleheads are carefully researched, hand painted, and crafted with care, each design is extremely detailed. Royal Bobbles is leading the industry with their realistic and lifelike likenesses, making them right at home in any environment, whether it's on a desk, display case or even in the classroom! PREMIUM BOBBLEHEAD STATUETTES: Founded in 2009, Royal Bobbles is a premium designer and manufacturer specializing in high-quality, exquisite collectible figurines, allowing for a high level of detail and durability in every product. The quality and detail of Royal Bobbles products and packaging is unmatched in the industry.