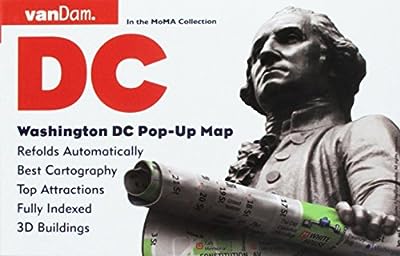 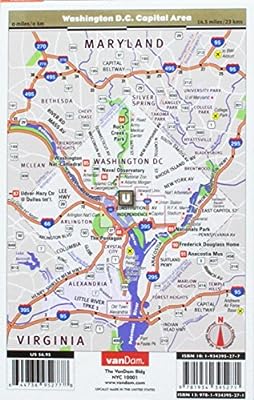 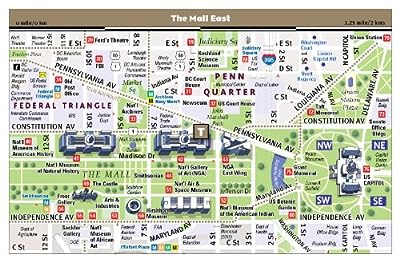 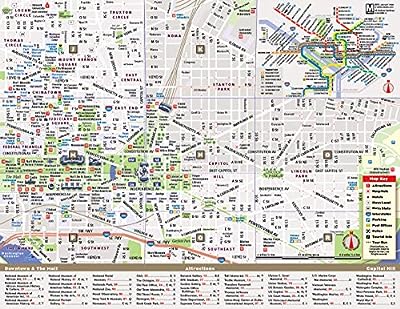 Washington DC Pop-Up Map maps all top attractions including museums, major architecture, hotels, theaters, shopping destinations, and the Metro system for all of Washington DC at an immensely legible scale of 1:32,000, complete with 3-D building illustrations. Clear information design allows users to read the map from three feet away and has earned VanDam maps a place in the MoMA Collection. The map is laminated, pocket size and unfolds to 12 times its original size, then refolds itself by closing the covers. The map easily fits into your pocket or purse. Dimensions: 3.75” x 6” closed, 8.5” x 11” open per section. Coverage: Mall Map: 1:9,500 Washington DC Street Map 1:16,000 Beltway Map: 1:238,000; Capital MetroTransit Map. Washington DC Pop-Up Map is so legible you will instantly understand the National Mall and how it connects to other parts of the District and Old Town Alexandria. You get God's perspective on Monument City as well as the minute details. This 18th Century city grid with grand diagonal avenues designed by Pierre L'Enfant is a metaphor for the division of power in the Republic. A right triangle with Pennsylvania Avenue as hypotenuse and grand connector between the Executive (White House) and the Legislature (Congress) with the Judiciary (Supreme Court) backing up to Congress on Capitol Hill. The Washington Monument describes the triangle's Western point and serves as your compass needle to navigate the Capital. Washington DC Pop-Up Map includes a stunning dimensional Mall detail of the central city from Arlington National Cemetery through Foggy Bottom, Federal Triangle, Judiciary Square, Penn Quarter, Chinatown, Downtown, the East End and Capitol Hill. Restrooms and concessions are clearly marked. Separate Beltway and Metro DC maps insure you have everything you need for a successful trip. While politics in the Capital may be petty and divisive, the riches of art, science and culture offered in its museums almost all of them free are generous, conciliatory and un-equalled anywhere else. The hot ticket in town is the new African American Museum of History and Culture. Its bronze colored corona architecture boldly breaks the mold of the mostly white neo-classicist structures on the Mall and offers an intriguing perspective on American history. On the West Mall history is made manifest in the placement of the MLK Memorial where Dr. King stares down Jefferson with Lincoln's backing. Washington DC Pop-Up Map map scale of 1:6,000 makes you feel you are there with 3D buildings illustrations as your compass. All Metro stops are marked by their respective line in context right on the main map and on a separate subway overview so you know both the local details and understand the larger system. Stephan Van Dam, the map designer and publisher has mapped the Capital for the Smithsonian, The National Gallery and the National Park Service. We also publish a series of Presidential History Maps Lincoln, Jefferson and Washington as well as WDC Pop up Map. Washington DC Pop-Up Map maps are updated twice a year and are more current than any other map available. A customer recently suggested our maps are too good but we like quality that lasts. Simplicity reigns supreme to make complex cities clear and understandable. Our typography creates character and reveals the true bones of the vertical city. VanDam uses a letter grid to identify locations on maps - no confusing and cluttering K-28 or V-34s - its just the city from A-Z. Our covers map the icons of each city and turn them into collectible graphic art. Each sleek and laminated city snuggly fits into a shirt pocket.