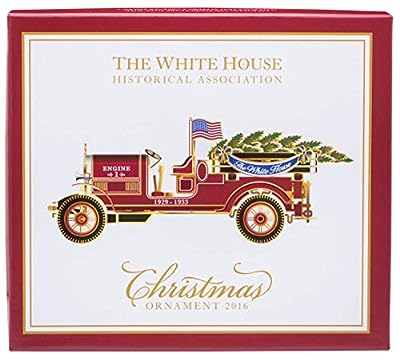 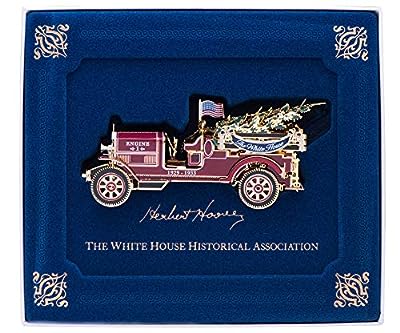 The 2016 White House Christmas ornament honors the administration of Herbert Hoover, who served as the thirty-first president of the United States from 1929 to 1933. It is inspired by the fire engines that responded to the 1929 Christmas Eve fire at the White House and the toy trucks presented to children by the Hoovers the following Christmas. On December 24, 1929, the White House was filled with Christmas cheer when traditional festivities got underway. President and Mrs. Herbert Hoover were entertaining his staff and their children at the party while the Marine Band played carols. The drama began when Chief Usher Ike Hoover whispered to the president, "The executive office is on fire!" President Hoover rose from the dinner table and asked the men to follow him to the West Wing. The men proceeded to rescue as many of the president's papers as time allowed, while First Lady Lou Hoover, informed of the blaze, calmly supervised the party. The four-alarm fire brought nineteen engine companies and four truck companies to the White House. One hundred and thirty firefighters began to battle the blaze. The bitter cold temperatures froze some of the hoses. By about 10:30 p.m., the fire was extinguished. Fire Chief George Watson reported that excessive heat from a blocked chimney flue or defective electric wiring had caused pamphlets stored in the attic to ignite, and fire had spread quickly. Congress would soon pass a special appropriation to rebuild the uninsured office wing. The Charles H. Tompkins Company of Washington, D.C., completed the work and Hoover and his aides moved back into the remodeled West Wing on April 14, 1930. The 2016 ornament design was created by art student Kayla Whelan, the winner of a national art school design competition created by the White House Historical Association. Whelan attends Montserrat College of Art in Beverly, Massachusetts.

The 2016 ornament honors the administration of Herbert Hoover, who served as the thirty-first president of the United States from 1929 to 1933. Made in the USA Crafted from 24-karat gold finished brass 3 1/2 x 1 1/2 x 3/4 inches Includes a brochure describing the inspiration for its design and historical background. 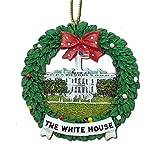 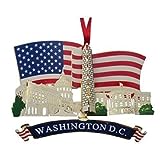 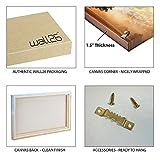