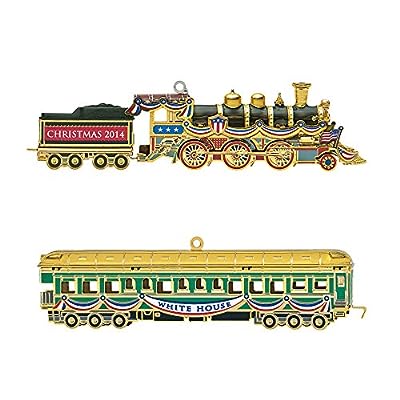 The 2014 Official White House Christmas Ornament honors the administration of Warren G. Harding, who served as the twenty-ninth president of the United States from 1921 to 1923. As a young boy, Harding dreamed of being a locomotive engineer-a wish that was to come true for 51 minutes when as president, he took over the controls on the Alaskan railroad during the "Voyage of Understanding," his famous transcontinental speaking and sightseeing tour. The Presidential Special, the train that carried President Harding west at the outset of his ambitious voyage and that would tragically carry his casket back east following his sudden death, just two months later, is the inspiration for our train Christmas ornament for 2014. Decorated with gold tones and enamel finishes, the 33rd annual White House Christmas Ornament is our first ornament to be comprised of two pieces, which can be hung as two separate ornaments or linked together. The locomotive is a detailed miniature replica of one of several steam-powered locomotives that pulled the Presidential Special; it is attached to the coal car that held its fuel. The other miniature car is the Superb, the president's private heavyweight Pullman car. The last car on the Special, the Superb was outfitted with a public address system. President Harding made appearances and delivered speeches at stops across the country from a platform at the back of the car. The last known photograph of President Harding is an image of him on the Superb shortly before his death in a San Francisco hotel on August 2, 1923. On August 3, President Harding's casket was placed on board the Superb and began a return trip to Washington, D.C., during which an estimated 3 million people paid their last respects.

The 2014 Ornament honors the administration of Warren G. Harding, who served as the twenty-ninth president of the United States from 1921 to 1923. Made in the USA Crafted from 24-karat gold finished brass Engine: 3¼ x ¾ inches; Pullman car: 3¼ x ¾ inches Includes a brochure describing the inspiration for the design and historical background. JFK in DC: A Walking Tour and Illustrated Guide to JFK-Related Sites in Washington, DC 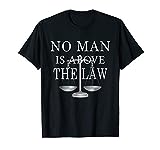 No Man is Above the Law T Shirt