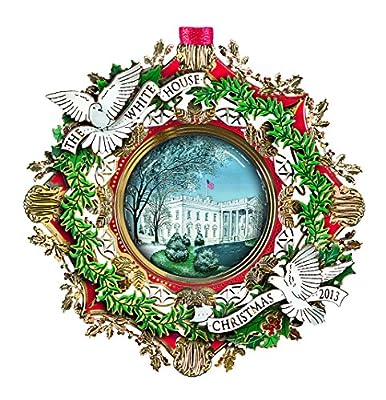 The 2013 official White House Christmas ornament honors Woodrow Wilson, the twenty-eighth president of the United States. The years of Wilson's two terms in office, from 1913 to 1921, are defined by the unprecedented devastation of World War I, yet Wilson himself would be awarded the Nobel Peace Prize in 1919, and his life is distinguished by his resolve that the Great War would truly be the war to end all wars. It was President Wilson's extraordinary quest for a lasting world peace that inspired the design of our ornament. The centerpiece of the White House Christmas ornament for 2013 is an American Elm tree planted by President Wilson on the North Lawn of the White House on December 18, 1913, just before Christmas. This snowy scene is surrounded by a 24-karat gold-finished frame comprised of elm leaves on the innermost circle, a wreath of olive branches in the middle, and holly leaves bordering Wilson's monogram on the outermost circle. Two peace doves perch upon the olive branches, bearing banners that announce "The White House, Christmas 2013." The words inscribed on the reverse side of the ornament were delivered by President Wilson in his War Message to Congress of April 2, 1917: "Peace must be planted upon the tested foundations of political liberty."

The 2013 ornament honors the administration of Woodrow Wilson, who served as the twenty-eighth president of the United States from 1913 to 1921. Made in the USA Crafted from 24-karat gold finished brass with an acrylic dome 2 ¾" inches in diameter Includes a brochure describing the inspiration for its design and historical background.